Our Work Biodiversity An open letter to the Andrews’ Government: Less talk, more protection for nature

An open letter to the Andrews’ Government: Less talk, more protection for nature 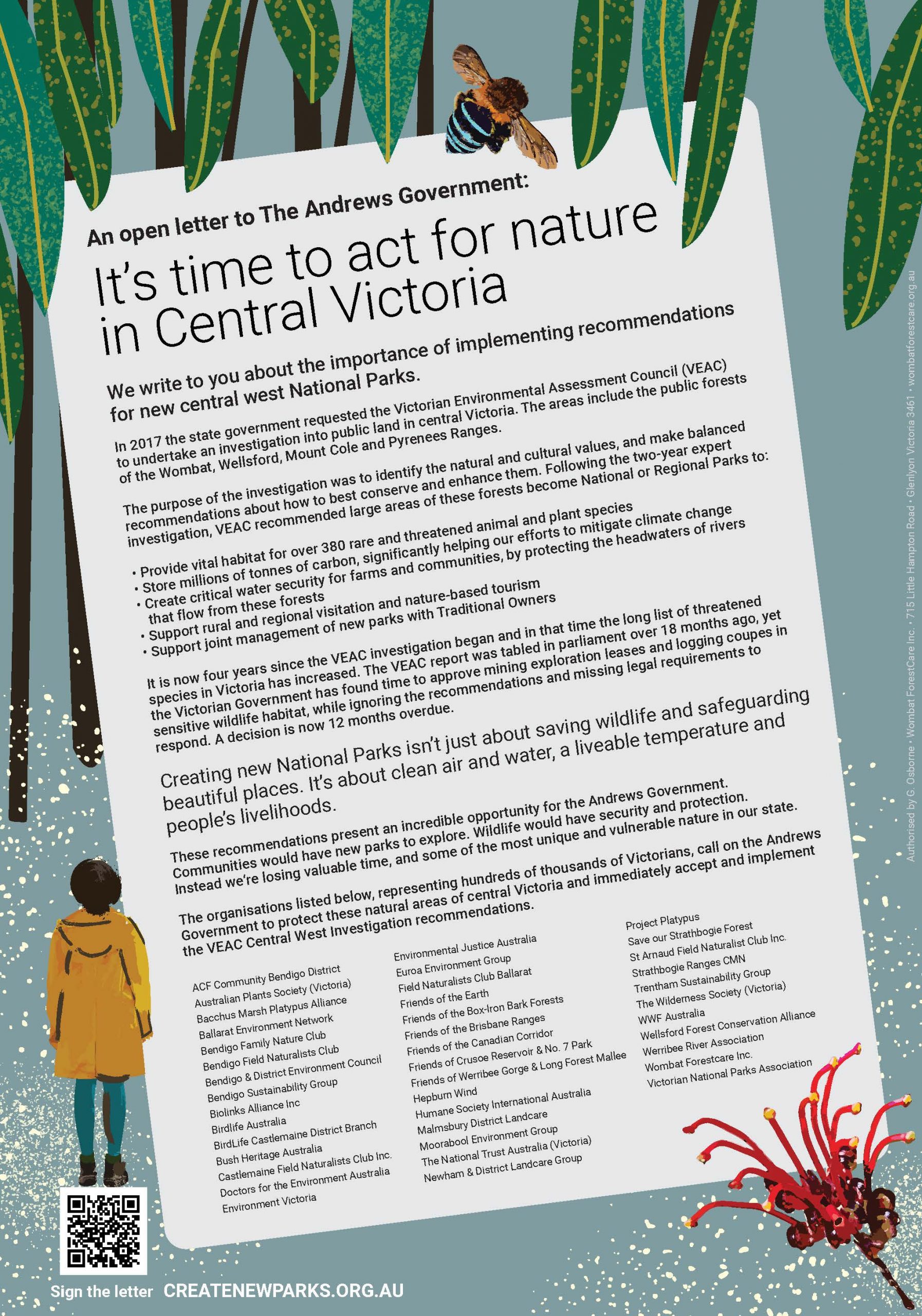 Over forty state, national and international groups representing hundreds of thousands of Victorians, call on the Andrews’ Government to accept recommendations for new national parks in Victoria’s central west.

A mighty collaboration of groups, coordinated by local community conservation group Wombat Forestcare, is calling on the Andrews Government to hurry up and get on with creating and implementing new parks for Victoria, through a series of full page adds in six papers across key regional centres of Bendigo, Ballarat, Castlemaine, Moorabool, Daylesford, Macedon.

Following the two-year expert investigation by the Victorian Environmental Assessment Council (VEAC), recommendations have been made for large areas of public forests of the Wombat, Wellsford, Mount Cole and Pyrenees Ranges in Victoria’s central west to become National (almost 60,000 hectares) or Regional Parks (almost 20,000 hectares).

The Andrews’ Government decision is already over 12 months overdue, and after years in the making, the lack of action has left regional and conservation groups from around the state feeling deeply disappointed.

Gayle Osborne from Wombat Forestcare, a guardian of the Wombat Forest, near Daylesford said: “The Wombat forest has so many values that need protecting; the headwaters of six major rivers, many rare and threatened species and the storage of carbon.”

“How long do we have to wait for the Victorian government to take nature protection issues seriously?”

“This sentiment is merely nice words on glossy paper until we see real commitment to protection for these special places.” added Gayle Osborne.

Wendy Radford, a local from Bendigo and representative from the Wellsford Forest Conservation Alliance said:

“COVID-19 showed us how valued our forests and natural places are to communities. People in Bendigo have overwhelmingly said that they want the Wellsford Forest protected from logging and mining.”

“The Central West Investigation conducted by VEAC was an exemplary expert process and the recommendations were supported by communities. What is the hold up?”

“While there is still no decision, we are losing patience, wildlife and habitats and faith in our elected leaders to take these issues seriously.”

“The Victorian Government has found time to approve mining exploration leases and logging coupes in sensitive wildlife habitat, while ignoring the recommendations and missing legal requirements to respond.”

“The clock is ticking, and it’s ticking very loudly for many of our most vulnerable native wildlife. If the Andrews’ Government is to leave a legacy in this term of government and improve their track record of poor national park creation, they are running out of time.”

These recommendations present an incredible opportunity for the Andrews’ Government to create new parks close to Melbourne. Communities would have new parks to explore and wildlife would have security and protection.

Enshrining these forests as National Parks would not only provide clean air and water, protect vital habitat for over 370 rare and threatened animal and plant species, it would also support joint management with Traditional Owners, and increase and enhance nature based tourism and regional visitation.

The purpose of the investigation was to identify the natural and cultural values and make balanced recommendations about how to best conserve them. It’s been done. Now it’s time for less talk and more protection.

Other groups and individuals are urged to add their name to the open letter and join calls to the Andrews’ Government to create and implement new parks at www.createnewparks.org.au.

More information
Link to the open letter in newspapers, copy of full page Ads and open letter for public: https://vnpa.org.au/openletter